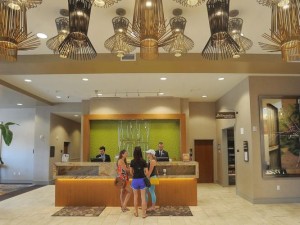 The Hilton Garden Inn Downtown is celebrating a major industry honor as it prepares for a couple months of solid construction for its new restaurant, Crave.

The hotel was recognized with the “most improved RevPAR” award from among the Hilton brand’s 665 hotels worldwide.

The property was one of nearly 60 individuals and hotels recognized worldwide by Hilton as brand leaders.

The hotel at 201 E. 8th St. is managed by Hegg Hospitality and was developed as a partnership between Hegg Cos. and Lloyd Cos.

“We were ecstatic,” said Steve Westra, Hegg’s chief operating officer. “That is a huge award in hospitality. In our world it’s like the Grammy’s. It is big. So we’re really proud of it.”

There isn’t much time to celebrate, though.

In the next two to three weeks, the hotel’s restaurant, Elements on 8th, will close and construction will start to renovate the space for Crave American Kitchen & Sushi Bar, which is expanding to Sioux Falls from the Twin Cities.

“It’s really just trying to pull the construction schedule together to have the least impact on hotel guests,” Westra said. “Everything has been ordered (for furniture and equipment) but before we start demolition we want to have all the materials in place and ready to go. Our goal is to pretty much work seven days a week, 24-7.”

The whole dining and bar area is being redesigned, and the large television in one of the dining spaces is being moved. The hotel will serve breakfast throughout construction.

“It will have a totally different feel and a lot more high-energy atmosphere,” Westra said.

The plan is to be done by early May.

“We want to get it ready to go for our patio and that’s important as well,” he said. “We know the sense of urgency to get this done as quickly as possible.”

See the original article at ArgusLeader.com.