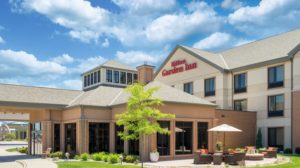 SIOUX FALLS, SD – May 18, 2016 – The 123-room Hilton Garden Inn Sioux City Riverfront hotel in Sioux City, Iowa is under contract to be acquired by an affiliate of Hegg Companies, Inc. of Sioux Falls, S.D. The acquisition also includes the Bev’s on the River restaurant, the attached marina, and the Jolly Roger, which is an outdoor riverside tiki bar. The Hilton Garden Inn Sioux City Riverfront is the premier hospitality property in Sioux City, located on the bank of the Missouri River.

“This is a strategic acquisition for our hospitality division, being the fifth owned-and-operated hotel, and our third Hilton Garden Inn,” said Paul Hegg, president of Hegg Companies. “The riverside location creates a unique hospitality and dining experience. The vision and legacy created by Larry Miller and Roger Miller, the original developers of the project, has made this property the go-to destination in Sioux City. Working with Hilton, we plan to build upon this history and will be announcing several new renovations to the property as part of Hilton’s brand requirements.”

Built in 2008, the hotel is comprised of 93 standard rooms and 30 suites. It features a remodeled lobby, lounge and dining area, a full-service American cuisine restaurant and bar with outdoor patio seating for up to 300, and four meeting rooms that can accommodate up to 400 with a new patio area that can hold an additional 150. Furthermore, the hotel has an indoor swimming pool and whirlpool, a 24-hour business center and a 24-hour fitness center.

The hotel will continue operating as a Hilton Garden Inn and will be operated by Hegg Hospitality Management, LLC, under franchise from Hilton.