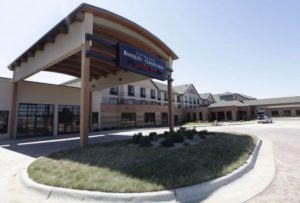 SIOUX CITY | A Sioux Falls-based company has agreed to purchase a riverfront complex in Sioux City that includes a Hilton Garden Inn, Bev’s on the River restaurant and Jolly Roger tiki bar.

The locally owned riverfront complex was developed at a cost of about $10 million by the Miller family, beginning in 2003 with the modernization of the Mlr Tym Marina. Bev’s on the River, an upscale restaurant and convention center, opened in 2005, followed by the connected Hilton Garden Inn two years later.

“The riverside location creates a unique hospitality and dining experience,” Paul Hegg, president of Hegg Companies, said in a statement. “The vision and legacy created by Larry Miller and Roger Miller, the original developers of the project, has made this property the go-to destination in Sioux City. Working with Hilton, we plan to build upon this history and will be announcing several new renovations to the property as part of Hilton’s brand requirements.”

As part of the deal, Hegg also will take over management of the marina, which the Millers leased from the city under a long-term contract.

This will be the seventh hotel property for Hegg Companies, three of which are Hilton Garden Inn brands.

The Sioux City hotel has 93 standard rooms and 30 suites and features a remodeled lobby, an indoor swimming pool and whirlpool, a 24-hour business center and a 24-hour fitness center. The full-service American cuisine restaurant and bar has outdoor patio seating for up to 300. The complex has four meeting rooms that can accommodate up to 400 with a new patio area that can hold an additional 150.

During the historic Missouri flooding of 2011, the hotel and restaurant were shut down for three months. The swollen river encircled the riverfront property, lapping at the large earthen levee, hurriedly built in late May that year in advance of the U.S. Army Corps of Engineers releasing record amounts of water from upstream reservoirs.

The complex sustained some flood damages, and also lost an estimated $1 million in revenue during the extended shutdown.

Read the original article on the Sioux City Journal.