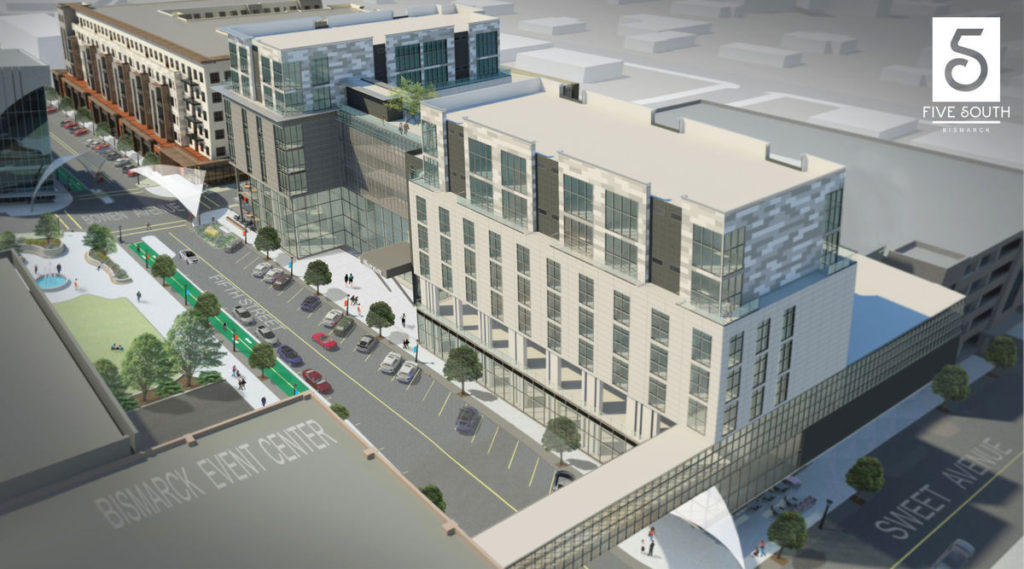 Groundbreaking is slated for March.

The four-star, 140-room hotel will be managed by Hegg Companies of Sioux Falls, S.D., and will have a Crave American Kitchen & Sushi Bar. Crave started in Minneapolis and recently partnered with Hegg to open a location in Sioux Falls, receiving rave reviews.

“These projects are hard,” said Cardon, adding that trying to secure a four-star hotel in a town the size of Bismarck as oil and agriculture prices slumped was even harder.

In addition, 250 units of studio through three-bedroom apartments, with both affordable and market-rate rents, will be built on the southwest corner of Fifth Street and Bowen Avenue.

Construction of the housing and hotel are expected to take 14 months, said Cardon, who expects the full FiveSouth project to take three years to develop.

For the retail portion, Cardon expects to begin announcing tenants within 30 to 45 days. Northwest Development Group and Consolidated Construction have signed a letter of intent for a six-story retail and commercial building.

In August, Bismarck city commissioners unanimously approved requests to draft a development agreement for the project.

Investors in a hotel, originally expected to have from 200 to 250 rooms, along with a mix of affordable and market-rate apartments, had to be secured in order to activate public spending.

The city will be asked to pay $1.5 million for property bought by Bismarck Industries, local investors in the project. Cardon Development Group, which is developing the project, will buy property containing the Bowen Avenue Strip Mall from the city for the same amount.

Cardon also will buy the city’s parking lot C for $1.3 million but is asking, if the $150 million project is built within five years, the purchase price will be forgiven by the city.

See the original article at BismarckTribune.com